All information on this page was updated on 8-28-2011. For the most up todate info go to http://www.handgunlaw.us/

States that do not issue endorsements to carry a concealed weapon: The Socialist States of Illinois,Wisconsin

Stay up to date and when traveling go to: http://handgunlaw.us/
For more information on the Missouri Conceal Carry Law, see the following: 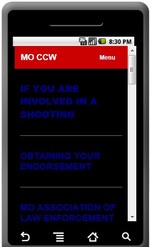 (1) While Florida's law allows licensees to carry stun guns, knives, and billy clubs in a concealed fashion, the laws in these states
allow for concealed carry of handguns or pistols ONLY, NOT WEAPONS IN GENERAL. Florida license holders are prohibited from carrying
other types of weapons while in these states.

(2) The State of VERMONT is unique in that it does not issue weapon/firearms licenses. Florida licensees - indeed, licensed or unlicensed
citizens from any state - may carry in Vermont. This presents a problem for reciprocity with Florida. Florida law provides that an
out-of-state resident must have in his or her immediate possession a valid license to carry a concealed weapon or firearm. Since Vermont
residents have no such license, the right to concealed carry cannot be extended to them under Florida law.

(4) These states will honor the Florida concealed weapon license ONLY IF the licensee is a resident of the State of Florida.

(5) The Attorney General's Office of the State of ALABAMA has indicated that Alabama will honor BOTH resident and non-resident
Florida licenses. However, the Alabama Attorney General notes that there is some uncertainty as to the limits of Alabama's reciprocity
law as it pertains to non-resident licenses. Pending clarification by the Alabama Legislature or a decision by an Alabama court, he urges
non-resident Florida license holders to exercise caution. Refer to the Alabama AG's Web page for the latest information.

(6) These states issue concealed carry licenses to qualified individuals who are non-residents. These non-resident permits cannot
be honored under Florida's reciprocity provision.

States that do not issue endorsements to carry a concealed weapon: The Socialist States of Illinois,Wisconsin

Stay up to date and when traveling go to: http://handgunlaw.us/